The Teton County Sheriff's Office is able to properly dispose of expired or unwanted medications. A disposal bin has been generously provided by the National Association of Drug Diversion Investigators and Idaho Truth208.

The disposal bin is located near the front entrance of the Teton County Law Enforcement Center, located at 230 N Main St,, Driggs ID. The bin is accessible to the public during business hours.

Please note, disposal is only allowed for prescription medications only.Liquids, syringes/needles, and illegal substances are prohibited from the drop bin.

Today the most popular drugs of choice among teens are Prescription pills (mostly painkillers), and a drug called "Spice" and spice is Legal.

There’s a drug popular with teens in the U.S. that many parents may never have heard of, but worst of all – it is legal. This drug, called “Spice” or “K2” is said to give the user a marijuana-like high. Sold in shops and online as incense, it is being smoked as a legal alternative to marijuana. But this drug appears to have far more dangerous side-effects and without the necessary regulation, consumers have no idea what they’re really getting.

Spice appears to have many negative side effects that marijuana does not such as anxiety attacks, hallucinations, nausea, and a chemical dependency. Three teenagers in Roswell, GA were recently hospitalized after using Spice. One teen had a severe reaction to the drug, resulting in swelling of the brain. Currently there is no way to test for the use of Spice, as it is not a regulated drug.Drugs commonly known as bath salts. These street drugs have been on the rise in recent years and pose serious problems for law enforcement. They are packaged to look like common household products with names like Lady Bubbles or White Dove.

But the chemicals in them and the high they produce can be devastating for lives and communities. Their effects can be stronger and longer-lasting than other drugs like amphetamines and cocaine.Researchers are trying to understand how they work and how the chemistry behind them continues to change.Skittles parties. Pharm parties

The host or hostess invites his/her teen friends to a pill party, often via e-mail. Pill parties are another reason parents should monitor their teen's computer activities.

The teen party giver sets-up a large bowl and teenagers attending the party toss in assorted meds they have brought from home. Medicines can range anywhere from cold tablets to tranquilizers. The person giving the party stirs the pills up. Everybody helps him/herself to a handful of drugs, as frequently as desired.

As a double whammy, alcohol flows freely at these disturbing pill parties. After scooping-up pills, the teen generally slugs them down with an alcoholic beverage.

Kids across America are suffering irreparable organ damage, chronic illnesses and even death resulting from these disturbing pill parties.

Know what meds are in your home and keep an accounting. If you observe that drugs are missing, don't procrastinate. Get pro-active and investigate the missing drugs until you find out what happened to them.
If you have reason to suspect your child is abusing painkillers or attending pill parties, seek counseling or if necessary, get your teen into rehab.

Monitor their Internet activities. Another form of the pill party is conducted on the Internet where teens pass along "recipes" for dangerous drug cocktails
​ 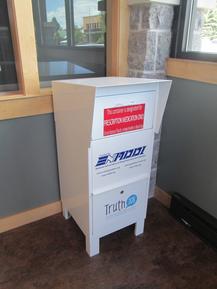 What do I do with my Expired or unwanted prescription drugs?